Auburn, ME - Deja Bennett, a senior standout at Buckfield Jr-Sr High School, has committed to join the women's soccer program in the fall. A Maine Soccer Coaches Regional All-Star and Mountain Valley Conference All-Conference Honorable Mention selection, Bennett is a physically strong midfielder who was used in a defensive role for Buckfield this past season.

Mustangs Head Coach Rob Rodriguez commented, "We have watched Deja play a number of times and she is a player who we have wanted to recruit since we first saw her.  Her ability to play as a midfielder and as a defender will give us some flexibility in our lineup, and being able to use a player in multiple roles is very important to us.  She is physically strong, can cover a lot of ground quickly and watching her match up against some of the top forwards in her league, she never got beat.  She is a smart player who understands angles and positioning which allows her to limit the opportunities from good attacking players."

Buckfield Head Coach Larry Thornton added, "Deja is an all-around solid player who excels in the midfield position despite her dominance during her senior year at sweeper, where she was a Class D Regional All-Star. She possesses and excellent strike on the ball and has outstanding speed.  Physical play has always been part of her game and her leadership skills will be an asset to the Lady Mustangs soccer program."

Bennett will have an advantage over many of the incoming freshmen when it comes to strength & conditioning, which the Central Maine program does a lot of.   The Buckfield Girls High School team did an off-season  program at CM last winter and worked with the Mustangs strength & conditioning coordinator, Alex Janelle.

Deja chose CM because of the reputation of the nursing program and was impressed with the new nursing lab and the new athletic complex when she came to visit.  "College soccer will be different from high school because it is faster and more controlled and the players have better foot skills.  What I can bring to the team is the ability to play offense or defense. I am looking forward to playing college soccer because I did not think I would be able to after tearing my ACL."

Deja has been an honor roll student and class vice-president for her four-year high school career. 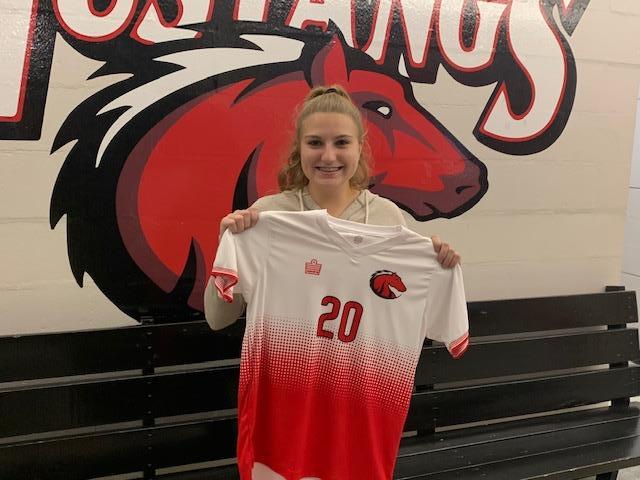